We’re nearing ever so close to the Hallmark Holiday of Valentine’s Day.

I’m sure y’all are thinking I don’t have a girlfriend with a statement like that. As a matter of fact, I do have a girlfriend! And no, she doesn’t want me to cave by buying gifts, flowers, or chocolate. It’s strange and comforting at the same time.

I’ve stated this several times that I don’t need a day, a world renown day, to declare my love for my partner. If you know anything about me, then you know this is true.

At the very least, you’ve gotta a send a greeting card of paper or emailed to your beloved. Hallmark and the other greeting card companies practically bank on this. Hence why I joked it’s a Hallmark Holiday. By the way, they have reported to have 1,330 different cards specifically for Valentine’s Day. Oh, and here’s some Valentine’s Day Trivia for ya … about 1 billion greeting cards will be exchanged this year. That’s enough to almost rival Christmas.

What about the florists of the nation? They account for some of their yearly sales based on rose purchases for this occasion. Don’t believe me? One source advised me that approximately 110 million red roses will be delivered within a 3-day period. Amongst that activity, 15% of women will send themselves flowers on Valentine’s Day. As to why, I have no idea and you’ll have to ask them why they did.

Again I find it humorous to witness those that participate in the holiday. Some of my friends will balk at this day, and celebrate Singles Awareness Day (S.A.D.) is a holiday celebrated by single people. It serves as a complement to Valentine’s Day for people who are single, that is, not involved in a romantic relationship. Some people who observe S.A.D. do so out of spite for Valentine’s Day, as a Hallmark holiday, or for other reasons.

On Singles Awareness Day, single people gather to celebrate or to commiserate in their single status. Some want to remind romantic couples that they don’t need to be in a relationship to celebrate life.

Common activities during Singles Awareness Day include singles’ events, traveling, volunteering, treating oneself to popular activities, gathering of family and friends, and gift-giving for oneself.

So Spaceship Earth, I ask you. Are you gonna celebrate Valentine’s Day, rock Single Awareness Day, or simply nothing at all? Lemme know as I’ll be doing the latter than the former.

Until next time, be good like you should, and if you can’t be good, be good at what you do! 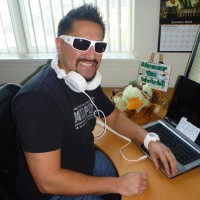 'los is DJ, MC, host with the most, and all-around good guy for Amore Events & Entertainment, LLC and SeattleDJ.com

Check Availability & Pricing for SOME of our services

Cash Equals Entitlement – What The Fox?
Chip N Dale Dancer: Carlos
Single Appreciation Day (S.A.D.)
You Get What You Pay For
White Elephant vs Gift Exchange Parties
Christmas Cards Are An Endangered Species